PGA Championship Week is once again upon us and though it may be a bit of a bummer that the 4th and final major is already here and will soon be gone, I assure you there are plenty of good tournaments with stacked fields to come and that the season is far from over. Coming off a very good week for a lot of us DFS’ers my goal is to keep the momentum going heading into this major championship week. Let’s jump right in.

Quail Hollow has hosted a long list of professional events, most recently and most importantly for us, the Wells Fargo Championship from 2011 to 2016. Some people will dive into the course history and past results this week and some will choose to skip that or focus other stats. I however am a firm believer that when the course history and prior results are available (even in this case, going from non-major to major), they are worth taking a look at. The course has gone through phases of redesign over the years and has been extended to a long 7,600 yard par 71 track. The course consists of four par-3s averaging 216 yards, eleven par-4’s averaging 456 yards, and 3 par 5’s averaging 572 yards. Here is the most recent version of the card:

Distance will help and accuracy will help even more, based on the long narrow fairways with strategically placed bunkers, plenty of water, trees, and shaggy bermudagrass. The course record holder and likely a very high-owned pick this week is Rory McIlroy who fired a 61 in the third round of the Wells Fargo Championship in 2015. Rory has performed extremely consistently here in the past, winning in 2015, coming in 8th in 2014, and 4th in 2016. The course is going to reward players that can keep the ball both long and straight enough to have clear approaches into these protected greens to gain opportunities to convert birdies.

In addition to the prior 3 years of Wells Fargo results, the key stats that I chose to take a look at for this week are: strokes gained tee-to-green, driving distance, strokes gained off the tee, birdies gained (as always), bogeys avoided (as always), strokes gained approach, strokes gained putting, sand saves gained, par 3s 200-225 yards, par 4s 450-500 yards, and one new one here: DK Points. Again, all of these stats were pulled from a last 12 rounds sample size. Going heavy on the stats this week, I am going to highlight some of my favorite studs/top dollar options, midrange plays, and value picks to get you looking in the right direction while constructing lineups leading up to Thursday morning.

Rory McIlroy: I have been a strict Rory-fader more or less since The Masters, but that is likely to change this week. As mentioned earlier, McIlroy holds the Quail Hollow course record and has a great history here, finishing top-10 in his last three starts here which includes 4th last year and 1st in 2015. He appears to be back in major champion form ever since the 2nd round of the British Open where he ended up finishing 4th. He went on to play very consistent golf last week at the WGC Bridgestone Invitational going 67-69-68-69 to finish in 5th. 12-round stats that stand out for Rory are 5th in driving distance, 1st in strokes gained off the tee, 14th in bogeys avoided, and 14th in sand saves gained. I have never been a big Rory guy, but this is his course and we all know he is more than capable of winning majors. A very solid play this week.

Hideki Matsuyama: Although I am not  a huge fan of playing someone the week after a win mainly due to the inherent salary bump, Hideki has been top of the line consistent this year. He has made 14 of 15 cuts and is coming off of a flawless 4th round 61 to capture a WGC title. He came in at 20th and 11th in his past two Wells Fargo/Quail Hollow starts, and is yet again all over the stat lines. For the past 12 rounds, Hideki sits in 3rd in strokes gained tee-to-green, 29th in driving distance, 3rd in birdies gained, 15th in bogeys avoided, 7th in strokes gained approach, 22nd in sand saves gained, 13th in par 3s 200-225 yards, 3rd in par 4s 450-500 yards, and my personal favorite, 1st in DK points. He is one of the most consistent guys on tour and will likely be high owned here.

Rickie Fowler: I refuse to not mention him until he brings one home. Rickie appeared relatively quiet last week, but did what he had to do on Saturday and Sunday (unfortunately being outshined by the aforementioned Hideki Matsuyama’s Sunday 61) and ended up coming in 9th. This is anything but unusual for him, which is why I believe it is only a matter of time before he strings all 4 rounds together in a large event. He came in 4th at last year’s Wells Fargo Championship at Quail Hollow and also appears all over the 12-round stats. Most notably, 10th in birdies gained, 4th in bogeys avoided, 2nd in strokes gained putting, 9th in sand saves gained, and 16th in DK points. Keep an eye on him.

Adam Scott: Although Scott hasn’t nailed down a top-5 finish yet this season, he remains in the hunt in almost every event he plays in. He has made 12 cuts in 14 starts and has 4 top-10s. His last two starts were the British Open and the WGC last week, where he finished in 22nd and 13th. Last year at Quail Hollow Scott finished in 17th. For 12-round stats, Scott sits in 24th for strokes gained off the tee, 26th in birdies gained, 19th in sand saves gained, 16th in par 3s 200-225 yards, and 10th in total DK points. 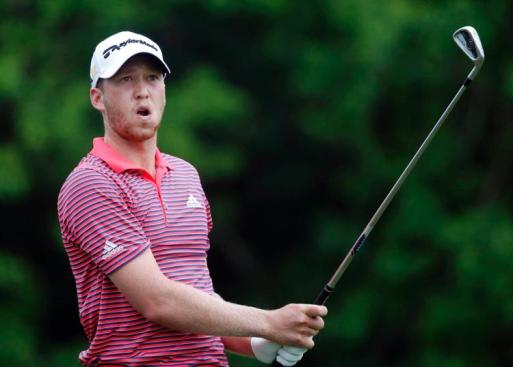 Daniel Berger: Berger has had a very strong season thus far with 5 top-10s in 17 starts and 13 cuts made. He got his first win at the FedEx St. Jude’s Classic in June and hasn’t slowed down since. His poor performance at the US Open may cast some doubt on his large-tournament performance, but he has proven capable in more recent weeks, finishing 27th in the British Open and 17th in last week’s WGC. For 12-round stats, Berger is 10th in strokes gained tee to green, 7th in birdies gained, 19th in bogeys avoided, 1st in strokes gained approach, 29th in strokes gained putting, 11th in total DK points, and has finished in 28th and 17th the past two years at Quail Hollow. He is priced nicely this week and is definitely capable of making a run for a major here.

Charley Hoffman: Another guy who has been playing outstanding golf lately. Hoffman has finished top-10 in 4 of his last 6 starts, has made 18 cuts in his 22 starts this season, and has 6 total top-10 finishes. For the past twelve rounds, he sits in 7th for strokes gained tee to green, 21st in driving distance, 4th in strokes gained off the tee, 1st in birdies gained, 28th in strokes gained approach, 20th in strokes gained putting, 3rd in total DK points,  and 4th in par 4s 450-500 yards. He is capable of big things when surrounded by all the talent the PGA has to offer and even better, he remains at a very affordable price this week.

Tony Finau: In his last two starts at Quail Hollow, Finau finished 16th and 28th. He is yet to get a win this year, but has set himself up well multiple times with 16 cuts made in 19 starts. His most recent outing was the RBC Canadian Open where he finished 5th. His only major of the year was the British Open, where he played consistent enough golf to finish top-30. What is most enticing about Finau this week are his 12-round stat lines. Finau sits in 1st for driving distance, 11th in strokes gained tee to green, 4th in bogeys avoided, 5th in total DK points, and 8th in par 4s 450-500 yards. Quail Hollow should play nicely to his game and he may be a good option to fill out those lines without eating up too much salary.

Gary Woodland: Here is a guy that had a strong start to the season and then did some fizzling. He had success at the RBC Canadian Open, finishing in 4th, but struggled in last week’s WGC event, finishing 63rd. Looking at his four day scores last week (74-77-70-67), he definitely benefited from no cuts being made. He does appear to have his lowest rounds on the weekends, so at his very low salary, if he can squeeze out a made cut, owners will be in good shape. And the good news is, he’s made 14 cuts in 16 starts this season and has 4 top-10 finishes. He also has quite a few impressive 12-round stats including: 8th in strokes gained tee to green, 18th in driving distance, 13th in strokes gained off the tee, 12th in strokes gained approach, and 10th in par 5s 550-600 yards. To top things off, his Quail Hollow course history is also there, finishing in 18th, 4th, and 24th in 2014, 2015, and 2016. I say look out for some Woodland this week.

Jamie Lovemark: Lovemark has made 15 cuts in 18 starts this season, hasn’t gotten a win yet, but has 3 top-10s mixed in with multiple other impressive finishes. For majors so far this year, he played in two, finishing in 22nd in the British Open and 27th in the US Open. Once again, what really caught my eye was his recent performance and what the stat lines show. This course may be a good one for Lovemark. Notable 12-week stats include 7th in driving distance, 9th in strokes gained off the tee, 4th in birdies gained, 4th in bogeys avoided, 13th in total DK points, and 28th in par 4s 450-500 yards. I am going to try to ignore the fact he came in 53rd in his last outing at Quail Hollow – he’s a new man. Though he’s cheap, I know there are cheaper. As for most value out there, if he makes the cut he will be worth your while.