We’re back for one last full-sized PGA Tour DFS slate before a little holiday break. The real 2018 season will kick off in January, so I am going to go ahead and treat this week like it’s the last, even though we all know it’s not. Luckily, we won’t be going cold turkey over the next 6 weeks, as the Hero World Challenge takes place from November 27th to December 3rd, and yes, Tiger is back, yet again – or so he says. A little something to look forward to.

We’re coming off an interesting week in Mexico at the OHL Classic where Patton Kizzire took the W, narrowly avoiding a late charge from Rickie Fowler in the last few holes. On and off rain delays made things interesting and threw some real loops into DFS play, with some big names being right around the cut line – Hoffman and Reed missing the cut, Hadley just barely making the cut and then WD’ing with something along the lines of food poisoning I believe… For those who were burned by any of the above, let’s get it back this week.

Preview: The RSM has taken place each year since 2010 at Sea Island Golf Club in Georgia. Past winners include Mackenzie Hughes (-17) last year, Kevin Kisner (-22 and 72-hole record) in 2016, Robert Streb (-14) in 2015, and Chris Kirk (-14) in 2014.  Other past champs making an appearance in this week’s field include Ben Crane, Tommy Gainey, and Heath Slocum. The course is another short (7,005 yard) par 70, similar to our past couple weeks – and interestingly enough it’s actually played on two different courses, making things interesting and maybe a little more difficult in terms of course analysis. Luckily, course/tournament history will fill that void, and the courses aren’t all that different other than one having a little smaller and trickier greens. As you can pretty easily tell from past scores, this event is a bit of a shootout. Birdies are a must, low rounds are a must, and players will need to be under par to make the cut. Due to the many similarities in terms of how the course plays to last week, I am looking at the past three years of the RSM Classic as well as last week’s OHL Classic at Mayakoba in addition to multiple stat lines, over each player’s 24-rounds, as usual. Here’s a little summary of notable performances over the past three years here and last week’s OHL Classic:

As always, a bulk of this information is coming from fantasynational.com. Stats I’m looking into this week include SG tee to green, fairways gained, good drives gained, GIR gained, SG approach, SG scrambling, SG putting, birdies gained, bogeys avoided, and SG par 4 – all from each players’ previous 24 rounds, in attempt to capture recent form in our numbers. Let’s break this field down.

Kevin Kisner: For recent play, we don’t have much on Kisner. He had a mediocre playoff run until placing third at the Tour Championship, which is obviously quite impressive. What really sets him apart from the field and what I’m assuming his hefty $11,600 salary is based on is his past performance in the RSM: 4th in 2015 and 1st in 2016. For 24-round stats, we have basically nothing worth noting. I don’t doubt that he’ll perform here, but it’s not a sure thing and I can’t exactly justify the massive salary that he carries this week. I will be looking elsewhere for a little more value.

Always love me some Kuchar. Always. Especially on a course that favors accuracy and consistency over distance, like this one. His salary is definitely up there, but it’s cheaper than we saw Fowler last week, and I think there’s enough value in this week’s slate that it won’t be all that difficult to fit him in those lineups. His tournament history is along the lines of what we’d expect: top-25 twice in the past three years. He’s a cut maker and a grinder, coming off of a fantastic 2017 season. For 24-round stats, Kuchar sits 12th SG tee to green, 8th fairways gained, 2nd good drives gained, 6th GIR gained, 3rd SG scrambling, 14th SG putting, and 13th bogeys avoided.

Webb Simpson: Course history is lacking, but Webb has been playing very good golf and has a very strong 2nd half of 2017. In his two starts this season, he finished 17th and 20th, and did both in a very consistent manner. He’s another guy I don’t see missing the cut, but I don’t think he is a total lock, depending on who you really decide to build your lines around. Again, there are a lot of juicy options this week. For 24-round stats, Simpson is 6th in fairways gained, 5th in good drives gained, 22nd in SG approach, 2nd in SG scrambling, 18th SG putting,  1st in bogeys avoided, and 9th in SG par 4.

Brian Harman: Course history is great and he had a solid start to the season – 5th at the CJ cup, 8th at the WGC HSBC. He’s taken the past couple weeks off and his salary is hefty.

Studs I am not excited about: Kevin Kisner, Chesson Hadley (on the fence), Ollie Schniederjans

Zach Johnson: He has two solid starts this season and is coming off of a 4th round 64 at the OHL, where he ended up finishing 23rd. Before that, he finished 13th at the Safeway Open. On the not-so-great side of things, he’s missed the cut at the RSM 3 times in his 7 starts at the event – but, he’s played the event 7 times, which definitely can’t hurt. For 24-round stats, ZJ is 23rd in fairways gained, 9th in good drives gained, 25th in GIR gained, 27th in SG scrambling, 2nd in SG putting, 4th in bogeys avoided, 4th in SG par 4, and 7th in SG par 4 400-450 yards. If I were a gambling man, which I am, I’m saying he makes the cut and leaves himself a shot on the weekend.

Kizzire looked incredible last weekend playing alongside Rickie Fowler and hanging in there for the win. His past three starts have also been top notch: 10th at the Sanderson Farms Championship, 4th at the Shriners, 1st at the OHL Classic. One better, this is his home course. For 24-round stats, Kizzire is 14th SG tee to green, 20th in good drives gained, 1st in GIR gained, 8th in SG approach, 16th birdies gained, 3rd in bogeys avoided, and 17th in SG par 4. He may be chalky from the win last week, but I love him here, especially for $8,900.

Scott Brown: Another guy that I have been watching quite a bit over the past month. Notable recent finishes include 6th last week (with 4 consecutive sub-70 rounds), 5th at the CJ Cup, and 23rd at the CIMB Classic. His only true off week in the past month was the Shriners where he made the cut and finished 63rd. He also finished 18th here in 2016, showing he can have success in this event. Notable 24-round stats include 27th in good drives gained, 11th in bogeys avoided, 1st in SG par 4, and 7th in SG par 4 400-450 yards. Not bad for $8,000.

Other mid-range options to consider: Bill Haas (pricey), J.J. Spaun (pricey), Graeme McDowell, Brandt Snedeker (a toss up in my opinion), Beau Hossler, Bud Cauley – (I know this covers a lot of this range, but all of the above are viable options)

Ryan Armour: He missed his first cut of the season at the Safeway Open and bounced back to win the Sanderson Farms Championship. He followed that up with a 20th place finish at the Shriners and a great start last weekend, followed by a mediocre weekend, like many others in the field. His Saturday Sunday 73-72 don’t scare me all that much though due to how he’s been hitting the ball. He’s been all over the stat lines, and I think he is a great option at $7,800 this week. For 24-round stats he is currently 2nd in SG tee to green, 2nd in fairways gained, 3rd in good drives gained, 3rd in SG approach, 1st in birdies gained, and 7th in SG par 4. It almost seems too good to be true. I am going to trust the numbers here.

Brian Stuard: He’s made 4 cuts in 4 starts this season and has two top-10 finishes. He’s showing some inconsistencies, but ended hot last week with a Sunday 65 to finish 9th. He also finished 25th at the RSM in 2016. For 24-round stats, Stuard is 1st in fairways gained, 4th in good drives gained, and 2nd in GIR gained. Solid option for $7,600. 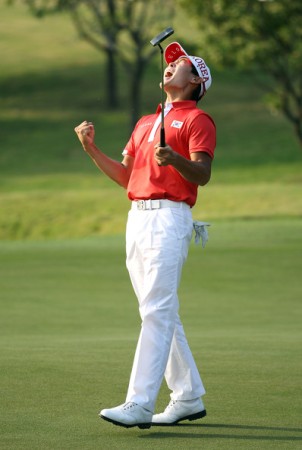 Patrick Rodgers: He’s made 4 cuts in 5 starts and looked great last week. He didn’t exactly keep his drives where they needed to be on the weekend during the OHL – so that’s something that can be improved upon. On a more positive note, he finished 10th here last year. His 24-round stats aren’t all that notable, but for his price, recent form, and course history, I like him.