Listen to the Pod here:

Francis Ngannou $8,900 vs Stipe Miocic $7,300 for the Heavyweight Championship.

Daniel Cormier $9,200 vs Volkan Oezdemir $7,000 for the Light Heavyweight Championship.

Let’s kick things off by talking about stacking five-round fights in your cash lineups. The potential for a five round fight to rack up fantasy points over the other three round fights on a card is substantial. It’s usually a good idea to stack it cash and be guaranteed about a quarter of the points you need unless it shapes up as a particularly lopsided fight. This card offer’s the unique opportunity of two five-rounders. Stacking both could leave you short of cash lines, however. You would need to get wins from both of your remaining two fighters. While certainly doable, you’re putting too much risk on two fighters, which is the opposite purpose of playing cash games.

I want to suggest this as an alternate strategy: stack the two favorites from those fights in Ngannou and Cormier. The odds both lose are low, and this creates the floor you’re looking for from an in-fight stack with a big upside if both win. If you have to stack just one, I would use Ngannou vs Miocic. Miocic is no daisy and he could gain an edge by utilizing his wrestling. It’s a gamble with Ngannou’s power, though.

While I do have some concern about Miocic taking Ngannou down, it’s minimal. Ngannou’s takedown defense has continued to improve and his camp will have surely included it. Miocic will likely be willing to trade with 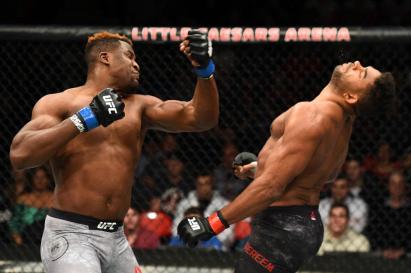 Ngannou, and people who get hit by Ngannou end up with rearranged faces. Just look at his significant strikes landed in his last four wins: 6, 8, 1 (submission win via kimura/brute strength), and 8. He doesn’t need to land too many punches to turn out your lights. Stipe is an absolute step up in opponent, but Ngannou is the real deal.

The only man able to fend off DC’s Olympic level wrestling is Jon Jones. He’s not fighting Jones, so it’s likely to be a one-sided affair. His price tag is a tough pill to swallow for someone that hasn’t always produced FPTS at an elite level, however. Volkan Oezdemir has also KO’d two straight legit fighters out of nowhere in the first round when they pressured him. DC certainly brings pressure. There’s also some concern coming off the war with Jones where he absorbed 95 strikes over three tough rounds. I’d build cash lineups around him but use him less in GPPs.

Barzola has exceeded 100 FPTS in his last two wins. He’s an active wrestler that’s busy on the feet, as well. Matt Bessette is stepping up on short notice for this fight. I just don’t see him being ready to deal with Barzola.

His two UFC losses have come to top guys in the division. That they were 2 of his last 3 fights will skew people. I love his striking. It’s fluid and powerful. Rob Font is a quality opponent, but not one that can strike with Almeida. Font has a tendency to stop and look after throwing a combo when he starts to tire. That’s a knockout spot.

Fighters I’m Off (Black eye emoji instead of fists, more means I like them less)

This fight should be less than entertaining as both fighters are more than willing to slow the pace (and gas out). Villante has a tendency to get reckless, though. Almost $9K is a steep price for a guy looking to brawl and not a clearly superior striker.

This is an immediate rematch after Alhassan won their first fight with a questionable stoppage. Sabah Homasi is a good fighter and will be better prepared for the frenetic pace Alhassan brings. Alhassan isn’t great off of his back either so Homasi would be smart to secure a takedown or two. In addition to that, Homasi is the bigger fighter. That’s way too many red flags for Alhassan at $9K.

Two winners on DWTNCS (Dana White’s Tuesday Night Contender Series) square off here. There’s just not enough known about these two fighters against better competition. At least for cash lineups. Take a stab on either for tournament long shots.

Sambo Champs are bad dudes. I’d like him a good 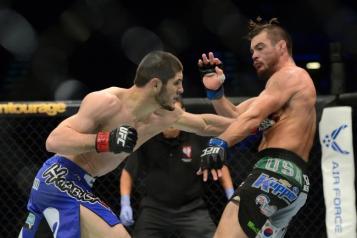 amount more if Gleison Tibau weren’t a good wrestler and strong as an ox. Tibau is coming off a two year PED suspension, so it’s no guarantee he still boasts that kind of strength. Vegas and DK think Makhackev’s a good bet too, though.

Getting Boston native Calvin Kattar, which is a slight concern. Burgos is a much more talented striker, though. Kattar is a bit of a lunchpail striker, meaning solid but unspectacular. I think Burgos speed and aggression get him the win in this one. He’s also working to maintain an undefeated record.

This is a major step up in competition for Alexandre Pantoja. Ortiz ‘s a pesky, grind you out fighter that brings relentless action. Pantoja has shown he possesses skill on the feet and a danger to submit opponents. This is a real test for him. It’s the kind of test that’s hard to pass the first time facing it. Ortiz has also never been knocked out and only submitted once in 24 fights, so he should get you some points even in a loss.

A hometown hero in play here. Bochniak got out wrestled in his last fight. That shouldn’t be an issue against Brandon Davis. If Davis shows up with the same gameplan from his DWTNCS he’s in trouble. That was a wildly inaccurate fighter that absorbed strikes. It shapes up to be a wild fight and anyone’s to win, though.