Welcome in Lineup Logic! The PGA Tour continues up the East Coast this week following a dramatic U.S. Open – and I’m not sure “dramatic” is even saying enough. I could write pages on Saturday’s happenings alone – but I’ll spare you. Long story short, Brooks Koepka put on as much of a showcase as one possibly could have while navigating the ins and outs and ups and downs of Shinnecock en route to back-to-back U.S. Open victories. His short game looked flawless on Sunday. In my opinion, it was just that which made the difference in holding off multiple late-tournament charges made by the likes of Tommy Fleetwood and Patrick Reed among a few others. And I’d be remiss to not mention the notable missed cuts of Tiger Woods, Jordan Spieth, Jason Day, Rory McIlroy, Jon Rahm, Matt Kuchar, Sergio Garcia, and Bubba Watson (yikes!). Tune into this week’s Lineup Logic “Sweet Spot” podcast to get a full recap of the event as well as some of our key takeaways as we move on to the next leg of the PGA Tour season. We’ll probably add a little Phil Mickelson, Ian Poulter, and USGA talk too – I mean, how could we not. And finally, a big congratulations to Brooks Koepka – the man is fully back, and there is definitely no arguing that.

Let’s get right into this week’s Travelers Championship. The tournament brings a stronger field than one may have expected following up a major, but there may be a couple reasons for that: FedEx Cup points, Ryder Cup standings, a $7 million purse, and just a short trip from Long Island to the suburbs of Hartford, CT, to name a few.

The Course: TPC River Highlands, 6,841 yards, par 70 (Cromwell, CT): Having been a stop on Tour for decades, the more experienced guys in the field know exactly what to expect. With that said, it doesn’t strike me as a track that will immediately rule out a newcomer. It’s not a long course at all. A majority of the course consists of relatively average distance (400-450 yard) par 4’s. The course will surely favor accuracy, with water coming into play on 6+ holes and a magnitude of precisely placed bunkers. The greens are hilly and small, with a Bentgrass/Poa mix  – averaging 5,000 square feet. The rough is what you would expect on the East Coast, with some fescue coming into play if you’re far off track.

With that said, some key stats I’ll be focusing on this week are: Strokes gained approach (as always), strokes gained ball striking, par 4 scoring, sand saves gained, and 3-putt avoidance. To get you thinking – here’s a breakdown of notable performances of this week’s field over the past 5 years at this event: 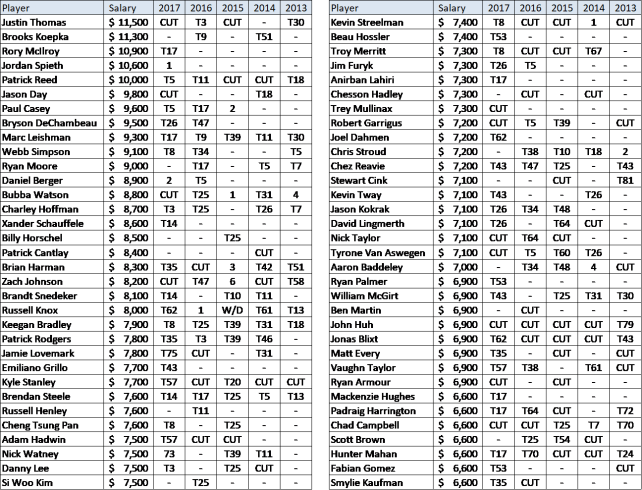 And before we get into some picks – here’s this week’s scorecard:

Similar to last week, I’m going to highlight some favorites in this week’s field. Myself (@donaldremington) and “The Sweet Spot” host, Mike Alexander (@Roto_Wan) will give our early favorites for DFS play by pricing tier – “Stud”, “Mid-Range”, and “Value”. As always, this is a first look. It’s Monday and we all have our research to do and our news to read. So FOR THE LAST TIME! Be sure to tune into the Lineup Logic podcast AKA “The Sweet Spot” for much more up-to-date analysis and picks. It’s well worth it. I promise.

@donaldremington – Patrick Reed ($10,000 DraftKings – $11,600 FanDuel):  People seem to constantly forget about this guy. If I remember correctly, he won the Masters this year? He went 9% owned in the DK millionaire maker last week, and finished in 4th place. Yes please. In a 24-round sample size, Reed is #1 strokes gained par 4, and basically top-20 in every other stat I found important this week. He’s coming off a long weekend, but we all know what he’s capable of. He has 7 top 10’s on the season, hasn’t missed a cut since February, and has very good tournament history. I’m hoping he once again gets overlooked being grouped in with some real big names.

@Roto_Wan – Jordan Spieth ($10,600 DraftKings, $11,500 FanDuel): For better or for worse, Speith has now had 5 disappointing outings in a row – the past two being missed cuts. Most of the DFS community has either already given up on him or is now on the verge of it. We’ve said it most weeks, but he’s undoubtedly going to make a statement one of these weeks.  He’s the defending champion here, and showed some promise on Friday at the U.S. Open, ultimately coming up just short, held back by his Thursday 78. As sour as some may be on Spieth, he’s made 11 cuts in 15 starts and has notched 5 top-10 finishes. His price is reasonable and we’re sitting here waiting to cash in on the public’s opinion.

@donaldremington: Daniel Berger ($8,900 DraftKings, $11,100 FanDuel): After a couple so-so outings, people weren’t convinced that the back-to-back champ could perform again at FedEx St. Jude Classic a couple weeks back. And they were right – he missed the cut. With that said, DB bounced right back with an impressive performance last week at the U.S. Open, earning a spot in the final group on Sunday, and ultimately falling back to 6th by the end of the day. All things considered, that’s his bread and butter. He’s a consistent player that we know can compete with the best. He finished T5 and 2nd the past two years at this event and we know his game is working for him from what we saw last week. I say it a lot, but putting four rounds together is key. He has struggled early on in his starts lately, and I’m hoping the confidence in his swing from Shinnecock will carry over into early days of this event.

@Roto_Wan – Webb Simpson ($9,100 DraftKings, $11,300 FanDuel): Your current PLAYERS Champ, who has made 13 cuts in 15 starts on the season, with 6 top-10’s. He slowly progressed each day last week and ended up T10 at Shinnecock. He’s really doing it all right now, and we all know the man can keep is straight and keep it in play. His game should fit real well at this course – a course that he is very familiar with. Another great option at a very affordable price. 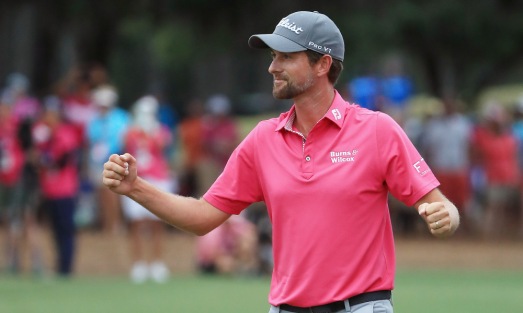 @donaldremington: Cheng Tsung Pan ($7,600 DraftKings, $8,600 FanDuel): First of all, that’s a great price on FanDuel. He’s gained 12+ strokes on the field over the past five years here, finishing T8 last year. He’s not at the point where he’ll ever garner substantial ownership, and I like that. He’s not safe by any means, but this is the type of guy you can roster that will give you the bump you need in a tournament to make some real cash. He’s coming off back-to-back top-20 finishes, and stats out very well in both accuracy and putting. When he puts it all together, we’re going to want to have a piece of him.

@Roto_Wan – Emiliano Grillo ($7,700 DraftKings, $10,200 FanDuel): Someone I could see getting some attention on DraftKings, but for good reason. He’s the monster of all models and has had a phenomenal season so far. His only missed cut so far this year (in his 18 starts) was last week at the U.S. Open. He had the weekend off to rest and prepare, with very little travel time in between. He’s got 6 top-10’s so far and I am almost sure we haven’t seen the last of him. For a 24-round sample size, Grillo stats out REAL well (as always) in strokes gained tee to green, ball striking, approach, par 4 scoring, and much, much more. It’s only a matter of time until he takes one down.

That’s all we’ve got for now. AGAIN – be sure to tune in to the Lineup Logic podcast // “The Sweet Spot” featuring myself and Mike Alexander. Thanks for reading and good luck this week!